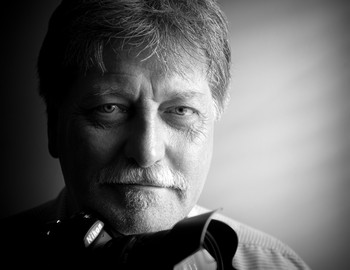 As a child, scanning through slides and photographs his father had taken, Charles Hahn found one in particular that stood out. It was a photograph of their family dog. It was not an ordinary photograph, as it seemed to capture the uniqueness and personality of their pet. From that early experience, he discovered the difference between an ordinary snap shot and a photograph, and he was hooked from that point on.

During his high school years, Hahn spent multiple hours in the darkroom at school. His parents gave him permission to turn one of their bathrooms and the basement into darkrooms as well. It was during these early years that he cut his teeth on black and white film developing and processing.

In the summer of 1975, this young photographer set out to document Chippewa Street, a seamy street in Buffalo, NY, for a high school art project. He photographed what would become the most iconic visual representation of the Chippewa Street area at that time.

This unsavory, crime-ridden part of the city was an area of society’s undesirables, homeless, and street people, each with a story to tell. The school, due to the overall nature of the area, first turned down Hahn fearing his personal safety. But, with some coaxing and the help of Lynn Hebert, his photography instructor, they finally approved and Hahn set out to capture the life of Chippewa Street.

He did not know at that time that his work would result in a journalistic photography essay of a world that would in the future no longer exist. These photographs, all shot in black and white with Kodak tri-x and plus-x pan film, now also serve a historical value as this area of Buffalo has completely transformed due to the renaissance of the city. At the time that Hahn captured street life on Chippewa Street, the area was deemed Buffalo’s unofficial "red light" district, which was occupied by taverns, topless clubs, cheap hotels, and a pornography shop.

This first foray into street photography would also be the predecessor of a project that would bring Hahn full circle in his art. In 2016, after a very successful showing of his Chippewa photo essay in Buffalo, NY, Hahn embarked on a new project in his current hometown of Winston Salem that was reminiscent of his photographs of Chippewa Street. The people and places were different, but the storytelling that Hahn’s lens presented was eerily similar. He set out to document the stories of people who are usually overlooked: the homeless.  Hahn notes, "There is beauty in all walks of life."

For Hahn’s project, "Beyond the Edge of the Fields", he recognized he had a need to break down certain barriers and get out of his comfort zone. He decided to meet and communicate with people who normally are considered insignificant; he wanted to show raw emotion from those disconnected from society. In an attempt to show their side of the story, the photographs are a realistic documentation of those often unseen or overlooked. Each photograph invites the viewer to seek answers to questions they normally don’t ask.

As Hahn befriended his subjects, he learned their history - where they had been and what they hoped for - and his photographs attempt to tell more than just a visual representation but rather a historical narrative though a visual chronicle that comes through unexpectedly; these are not snapshots or even simple photographs. Hahn has managed to capture a day in the life that few people ever see.

Charles Hahn grew up in Buffalo, NY, and he currently resides in Winston Salem, NC.  Combining his love of fine art with his passion for street portraits and street photography, Hahn creates unforgettable photographic images: people, places, and moments in time.